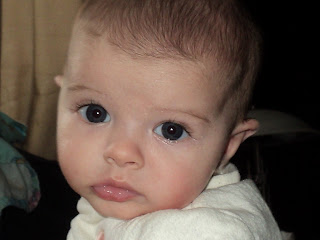 I never thought I would be a mother to three children.

In fact, I remember vowing as a child that I would never have any. Career-minded from a very young age, I felt I didn't need to be a mother and be defined by all that came with it. Or so I said. Loudly.

But in 1998, all that flew out the window with the birth of my son. Being a mom turned out to be much more fun than expected. So in 2002, I did it again, giving birth to my oldest daughter. And that was it. Or so I thought.

In March 2010, I found myself staring in disbelief at the positive pregnancy test. A number kept flashing through my mind: "three kids....three." One was tough, but very manageable. Two was definitely more challenging, but still rewarding. Besides, I had finally made it to the point where the physical work was virtually nonexistent, with a 12 and eight-year-old, and some freedom was slowly starting to unravel.

For years, I had struggled to balance a journalism career with the needs of two children, and we finally seemed to have found our groove. I had to wonder: Could I do the baby thing again?

On November 18, I did just that, with the birth of baby Chloe. Since then, life with a newborn, 'tween and teen has been no less than chaotic, exhausting and stressful--but I wouldn't trade it for anything.

And so I've decided to call my new parenting blog "And baby makes three," because as a parent, the number of children you have is definitely a big deal. Whether you're going from one to two or two to three children, there's simply no way to prepare yourself for how your life will change.

It's a wild ride. And I hope you'll follow along as I recount my life as a working mom of three children in three different stages in this blog: the issues, challenges and the incredible moments. There are so many.

And I hope you'll share your parenting experiences as well, by leaving a comment or e-mail editor@ottawaparentingtimes.ca.
Posted by Kelly Roesler - Editor, Ottawa Parenting Times magazine at 11:39 AM No comments:

Kelly Roesler - Editor, Ottawa Parenting Times magazine
Ottawa, Ontario, Canada
Kelly Roesler is an Ottawa writer and editor. Her work has appeared in the Ottawa Citizen, the international trade publication Organic & Wellness News and the community newspaper Kitchissippi Times. She has also appeared as a guest radio commentator on 580 CFRA, and has taught journalism at Algonquin College. Ottawa Parenting Times is her first foray into all things family, and "mommy blogging."